The CDFA Excellence Award recognizes outstanding development finance programs, agencies, leaders and projects, honoring excellence in the use of financing tools for economic development, as well as individuals who champion these efforts.

“The only way complicated public financing can be accomplished is by working with strong partners,” said Jean Carter Ryan, President of the Finance Authority. “The City of Dublin stepped up to the table early and often. When we had a capacity issue to fund Bridge Park’s west side garage, it was an easy decision to reach out to the Development Finance Authority of Summit County and the Toledo-Lucas County Port Authority. Working together is what we do.” 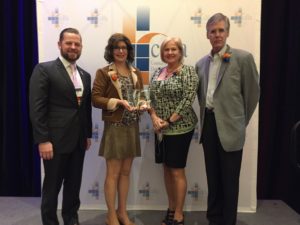 Bridge Park, a $500 million public-private project, is a walkable, urban community in the heart of Dublin’s Bridge Street District. The development includes more than one million square feet of mixed-use office, retail, restaurant and housing developed by Dublin-based developer Crawford Hoying. The Finance Authority has been working with Crawford Hoying on this multiphase project since 2015 issuing over $280 million in bonds.

When Covid hit Columbus, it hit cultural institutions hard. Not just in terms of …