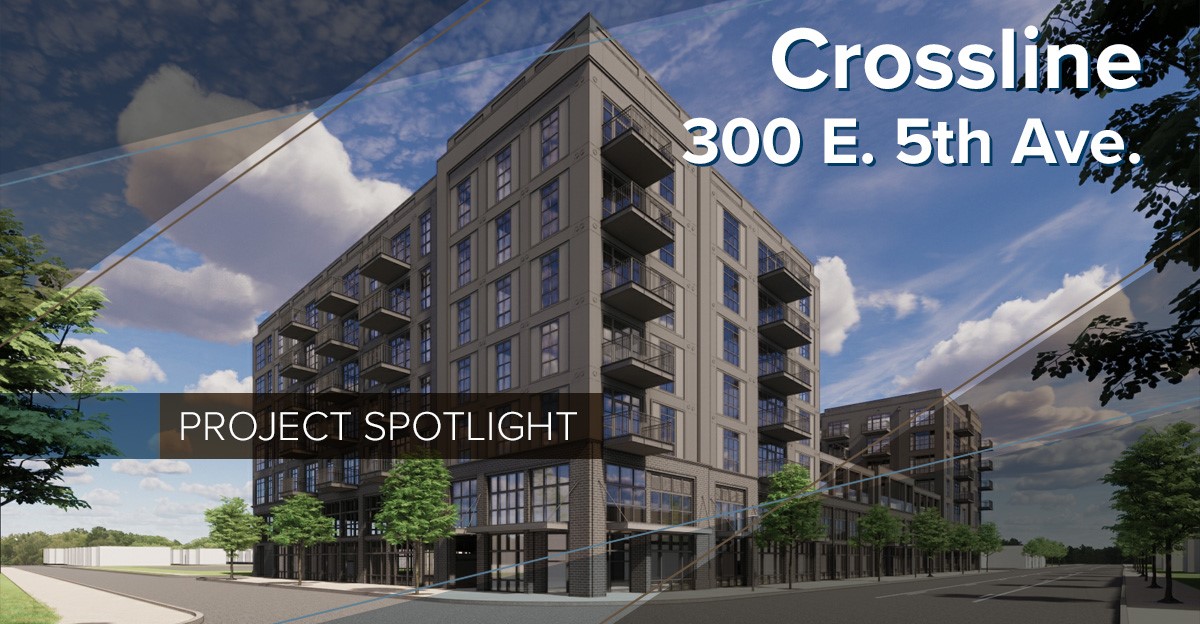 In his April 14 State of the City address, Columbus Mayor Andrew Ginther emphasized a social need that has become a priority for CFFA as well. “One of our critical challenges,” said Ginther, “is housing. Particularly affordable housing.”

According to Ginther, even before the pandemic, more than 50,000 residents in Franklin County were spending 50% or more of their household income on housing. So the city has set an ambitious goal of cutting that number in half by 2030. “Together, through public-private partnerships,” Ginther said, “we can begin to fix the housing crisis now.”

On April 28, Marker Development kicked off construction of Crossline, a mixed-use development at 300 E. 5th Avenue that will help chip away at the City’s housing goal. Part of the historic Weinland Park neighborhood, the six-story, mixed-use development will include 180 residential units (affordable and market-rate) and more than 5,000 square feet of ground-floor commercial space.

The project includes financing provided by CFFA that applies a new Franklin County policy relating to capital-lease transactions when used for multifamily projects. The policy requires that some of the cost savings realized by the developer through the capital-lease structure be shared with either the Affordable Housing Trust or Community Shelter Board. Crossline will be the first to benefit Community Shelter Board.

“The Crossline project allowed our organization to positively impact Central Ohio housing needs in two ways,” said CFFA President Jean Carter Ryan. “First, it supports the construction of new market-rate and affordable housing units. And second, it facilitates support of the Community Shelter Board.” Ten percent of the units will have a rental rate of 80% AMI. Capital-lease structures like this one lower overall project costs.

“This is a win for our community in more ways than one,” says CSB Executive Director Michelle Heritage. “It marks progress with affordable housing, as well as more support for our award-winning programs that help people facing homelessness.”

The $40 million Crossline development has personal meaning for several of the partner leads. “As a long-time volunteer and supporter of Community Shelter Board, I could not be more pleased about how this project will benefit CSB’s efforts to help those most vulnerable in Central Ohio,” said Alison Marker, president of Marker Construction. “We are particularly excited about our partnership with the Columbus-Franklin County Finance Authority.”

There’s also a personal connection for Curtis J. Moody, founder and chairman of Moody Nolan, architect of the Crossline project. Moody grew up in Weinland Park. “It makes me proud to be a part of the Marker team to continue to transition and revitalize this community,” he said.

Crossline’s name was inspired by Weinland Park’s early reputation as a “streetcar suburb” and the streetcar lines that once crossed through the neighborhood. It is expected to serve as a catalyst for a more vibrant 5th Avenue corridor. Marker estimates it took roughly a year to move from conception to the April 28 groundbreaking. Crossline is expected to open in May 2022.

“We in county government recognize the need to help provide all our residents with safe, clean and affordable housing,” said Franklin County Board of Commissioners President Kevin L. Boyce. “We’re happy to support the creative financing opportunities that allow our residents to have a place they can call home.”